How to Increase Download Speed on my Mac? Print

There are multiple factors that can dramatically influence the download speed on your Mac. Factors slowing down your downloads may be external, like the type of Internet connection used (cable, fiber, DSL), the Internet plan you've purchased from your ISP, and even the processing capabilities of your device. Sometimes, to speed up the downloads, you just need to tune the settings of your downloading app.

Let’s review all the factors that can hold back your downloads to be able to address the potential issues.

1. Actual Speed of Your Internet Connection

The easiest way to accurately measure the bandwidth speed of your Internet connection is to use a special online service, like Speedtest, or any other you prefer. The service will determine the performance of your Internet connection taking into account both download and upload speed indexes, as well as latency (network delays). The speed can be also tested on different servers - local and remote ones.

The download speed shows how quickly your device is downloading data from the Internet. On the contrary, the upload speed indicates the speed at which your device can upload data to the Internet. Both types are usually measured in Mbps (one megabit per second), which is equivalent to 1,000 Kbps. The higher the rating, the faster your Internet is.

Don’t get confused with the difference between megabits (Mbit) and megabytes (MB).

So, the speed value of 100 Mbps, indicated in your ISP contract, is equivalent to 12,5 MBps.

When you've finally got a sense of the actual parameters of your Internet speed, you can now see where the problem may potentially lie. For example, low download and upload speeds may signify that there’s an issue with your ISP (Internet Service Provider).

Your actual speed may be different from the one promised in your contract. Even the slightest difference can significantly affect the download speed.

Also, when getting slow download and upload speeds parameters, make sure to check the hardware. Using a wrong router or the cable which is insufficient for the bandwidth (for example, a 100 Mbps Ethernet cable while you have a 500 Mbps connection) may involuntarily slow down your Internet.

On the other hand, if speed tests show acceptable parameters, you may consider upgrading to a different plan from your ISP that features higher speeds, to maintain the type of online activity that you do. Check the maximum download and upload bandwidths allowed by your ISP. Downloading speed cannot surpass the one set up by the ISP. Torrenting, watching online videos, uploading tons of images to Dropbox or gaming surely require higher speeds than checking your email twice a day, so consider updating your ISP package.

When speaking of Folx, its maximum download speed is limited by the bandwidth speed and in reality can be even lower, since a certain part of the bandwidth always belongs to the service traffic. However, Folx's download speed may be significantly higher when downloading within a local network.

Often your download speed can be downgraded by the speed limits imposed by the contributing part. For example, a server can restrict the outgoing traffic or seeders can be deliberately limiting their upload speed.

Write speed is not the same for various devices like network drives, external hard disk drives, USB flash drives, etc. For instance, the speed at which data is read/written becomes the distinguishing factor when comparing HDD and SSD, the latter providing remarkably enhanced performance. So bear in mind that performance restrictions and transfer rate of certain storage devices can significantly affect the download speed.

Some countries with the censored Internet use various techniques to restrict access to unwanted content, including site blocking. China’s infamous “Great Firewall” is a classic example of Internet censorship. The users have to rely on various circumvention tools to access the blocked content, e.g. using proxy servers outside the firewall. Our recommendation is to use the desktop VPN running as a standalone application instead of an add-on to a browser, to encrypt all the traffic from your Mac to the Internet.

Throttling is an intentional slowing down of your Internet connection speed during the peak traffic hours by your ISP. Usually, it is done to regulate network when many people are all using the Internet at the same time. You’ll find that speeds return to normal late at night, for example, so you can try downloading when fewer people are online. Folx features a scheduling option to set up your downloads strategically during the off-hours.

Apart from limiting Internet speeds at certain times of a day, many Internet providers can also use another type of bandwidth throttling called Peer-to-Peer traffic control. This traffic-shaping technique restricts the speeds for specific websites and protocols, which usually affects such activities as video streaming, file-sharing, gaming, etc. Reducing the data usage can badly hold up downloading, especially from P2P networks like BitTorrent. The only way to bypass the P2P block is to use VPN. Data encryption prevents your ISP from determining what type of traffic you are having. Since it becomes impossible to inspect your traffic, there’s no way to throttle it. However, remember that using VPN itself degrades the Internet speed to a certain level. Speed drops can be caused by multiple factors, including extra CPU usage, excessive load on the router, latency caused by sending your data to a VPN server that is located geographically far away, and so on. Moreover, note that the higher the encryption level is, the more noticeably the speed is hampered.

To boost the download speed when performing direct downloads (via URL), you can try splitting the download into a number of threads. Fast downloading is ensured by multiple simultaneous connections (up to twenty) retrieving the same file split into numerous data packets. However, sometimes multithreading may potentially make things slower, say when the server is limiting the download speed for each connection or if the server is single-threaded. In this case, individual wait time for each thread becomes longer, thus using more threads makes the download slower than using fewer threads.

To accelerate the speed of torrent downloading, try playing with Folx settings:

1. Make sure the Incoming TCP port is open (Folx->Preferences…->Torrents->Network): 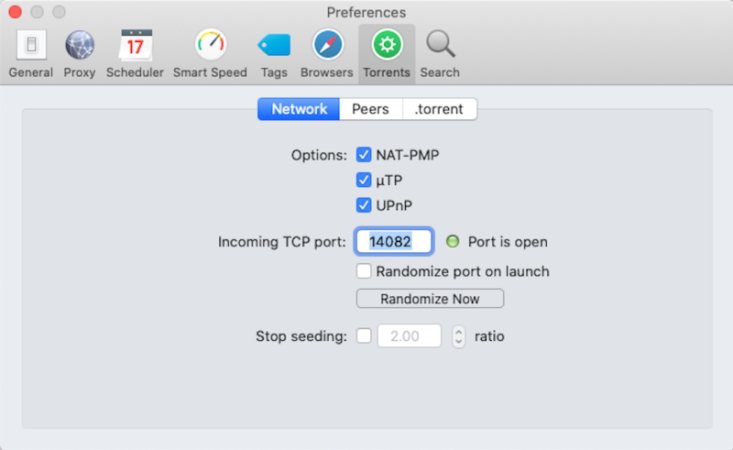 To make the port available for the incoming TCP connections, do the following:

If firewall is activated on your Mac, go to System Preferences > Security & Privacy > Firewall (if enabled) > Firewall Options. Allow incoming connections for Folx. 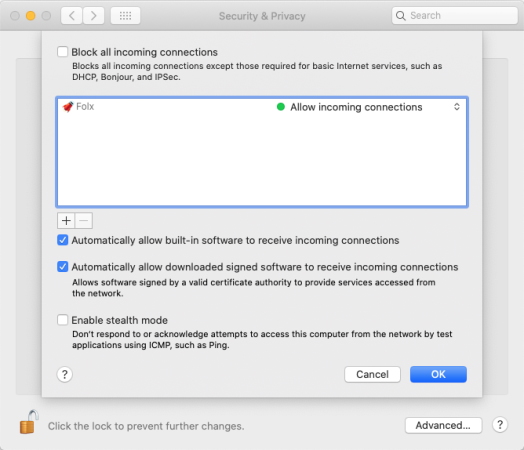 2. Go to Folx->Preferences…->Torrents->Peers and enable the following options:

The “Ignore unencrypted peers” option should be disabled: 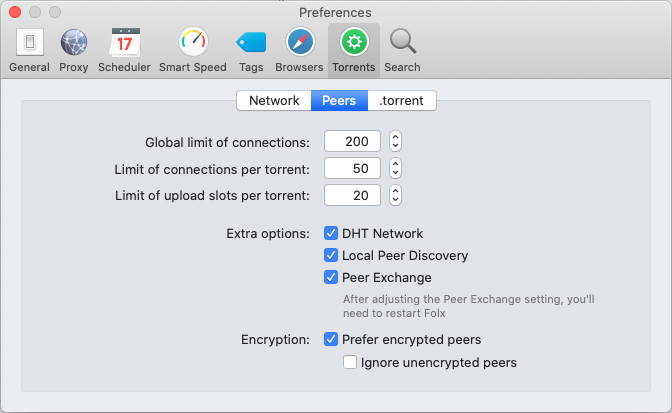 E
Emilia is the author of this solution article.